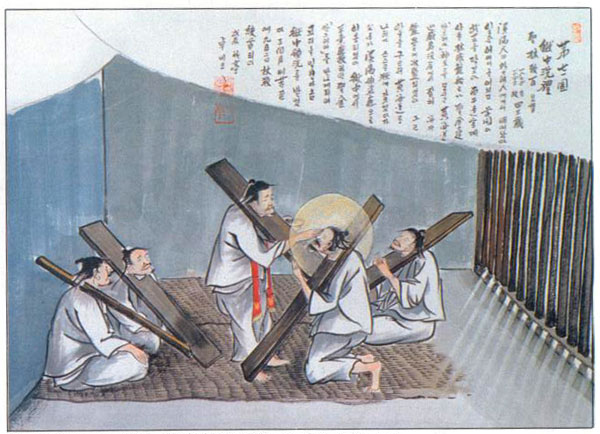 Im Ch'i-baek Joseph had been a pagan until he was arrested. He was born in a small village near the Han River, not too far from Seoul. When Joseph was young his mother died, and his father loved him very much. Joseph grew up as a good boy.

He attended a traditional Korean school for ten years to study Chinese literature. Then he engaged in trade. He was excellent in sports, music, poetry, art, etc. He had many friends.

His wife and children were baptized, but he himself used to say that he would be baptized later. He always liked the Catholics, and used to help them. He was not afraid to be associated with Catholics.

In 1835, he volunteered to become a policeman in order to help the Catholics when they were arrested. He always protected the Catholic people. In 1846, one of his sons accompanied Father Kim Andrew (the first Korean priest) to the western coast of Hwanghae Province, and was arrested together with Father Kim on June 5, 1846. When Joseph heard the news, he went to the spot where his son was arrested. He arrived there after his son had been sent to the Hwanghae prison. Joseph went to Haeju to ask the governor for his son's release, but the governor put Joseph in prison.

While Joseph was in prison, he had an opportunity to meet Father Kim Andrew. Joseph was very impressed by Father Kim's noble personality, high dignity and deep faith, and also by the fact that the Catholics respected and obeyed him. Joseph decided to become a Catholic. Father Kim told him to thank God for the special grace of God that he was in prison. Joseph took catechetical instructions directly from Father Kim in prison and was baptized by Father Kim and given the name of Joseph. Thus he became the second person to be baptized in prison, preceded by Kim Agatha.

His friends wanted to save his life and urged him to give up his faith. Sometimes they brought Joseph's two sons and two daughters-in-law to prison to persuade him to deny his faith, but Joseph refused to give in. The angry police chief hung Joseph upside down and beat him severely.

When Joseph heard three months after his imprisonment that he would be sentenced to death, he was very happy. He told the other inmates that he would go to Heaven first and welcome them when they arrived. One day the interrogator ridiculed him for being unable to recite the Ten Commandments. Joseph said that even an ignorant son could be loyal to his father.

When Joseph continued to refuse to give up his faith, the police chief used a pricking torture and a leg-screw torture. Joseph moaned with pain. The police chief said that he would take Joseph's moaning noise as a sign of surrender, so Joseph stopped moaning. It was amazing that Joseph, who was not even a Catholic when he was arrested, could endure all these painful tortures and be steadfast in his faith unto death.

According to the government document, Joseph was beaten to death on September 20, 1846. He could have been strangled, because Archbishop Mutel's testimony said that some of the Catholics were originally sentenced to be beaten to death, but those who didn't die, were strangled to death later. According to the Holy See's document, Joseph was actually strangled to death after many tortures. He was 43 years old.

When Joseph's sons wept for their dead father, the police chief consoled them, telling them that had seen a mysterious light shining over their father's body.