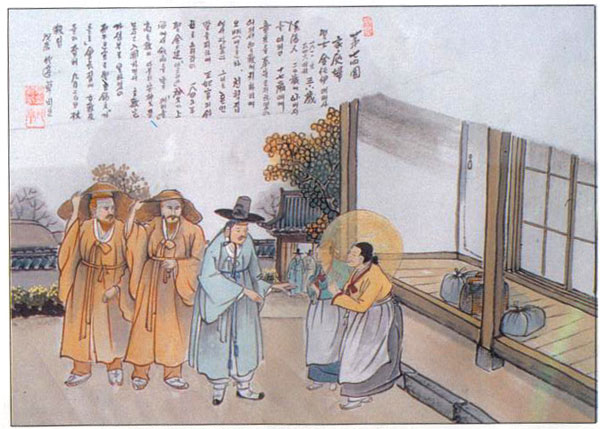 Kim Theresa was one of the pious women who were arrested on July 10, 1846 at the home of Hyŏn Charles. Theresa was born in 1811 in Seoul of a Catholic family. From the time she was young, she loved to read the lives of saints and imitate their virtues. When she was 17, she decided to remain a virgin. She thought of nothing else but loving God and serving her neighbors, particularly those in mourning. She also used to take care of dying people.

Theresa's relatives and friends suspected why she would not get married. In order to avoid the suspicion of others, she went into the princess' palace as a seamstress and spent three years there. Later she lived at the homes of her relatives or her friends, especially the home of Yi Mun-u John's foster mother.

Theresa was very happy to work as a housekeeper for Father Kim Tae-gŏn Andrew in 1845. She seemed to expect another persecution and to welcome it. She once told her sister that if Father Kim were arrested she would follow him even unto death. She told her sister not to expect to live long in the world.

The day before she was arrested, she went to her sister's home. Her sister asked Theresa to stay with her overnight. Theresa said that she had to go to Hyŏn Charles' new home to discuss important matters with the Catholic leaders. She left, and that was it. She was arrested on July 10, 1846.

Kim Theresa, U Susanna, Yi Agatha and Chŏng Catherine were arrested together, and they spent more than two months in prison. They all showed good examples of patience, love and humility while they were in prison. Of the four, Kim Theresa was by far the most courageous and encouraged the others to be steadfast in their faith. The document of the government (Sŭngjŏngwŏn Diary) stated that they would not deny their faith despite severe interrogations and tortures. On September 20, 1846, all four women and three others were either beaten or strangled to death, becoming glorious martyrs. Theresa was 36 years old when she was martyred.