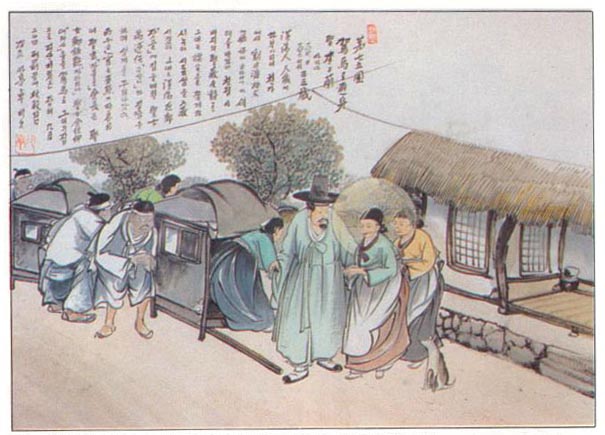 Yi Agatha was one of the four women arrested at Hyeon Charles' home on July 10, 1846. Agatha was born of pagan parents in 1813. At the age of 18 she married but her husband died two years later.

In 1834, she heard about the Catholic religion. She refused to remarry and asked her mother to have her meet a Catholic. It was not very difficult because there was a Catholic among her relatives. The Catholic relative taught Agatha, her mother and brother. They were all baptized by Father Yu Pacificus (a Chinese priest). Agatha's father was a stubborn pagan. He was angry to learn that his family had been baptized and sent Agatha to her deceased husband's home. He also sent his wife and son to Gyeongsang Province. Agatha obeyed her father and went to her deceased husband's home and was kind to the whole family. The family members were happy that one of their sisters-in-law had became a Catholic.

Agatha saved some money, bought a house and lived there with her friends. She was very devout and frequently fasted. The Catholics admired her and said that she was as clear as a mirror and as pure as snow.

Agatha was arrested with three other women on July 10, 1846. According to the document of the government (Sungjeongwon Diary), they stayed in prison for more than two months and were severely interrogated and tortured; but they wouldn't deny their faith.

Agatha and eight other martyrs were either beaten or strangled to death on September 20, 1846. Agatha was martyred at the age of 33.