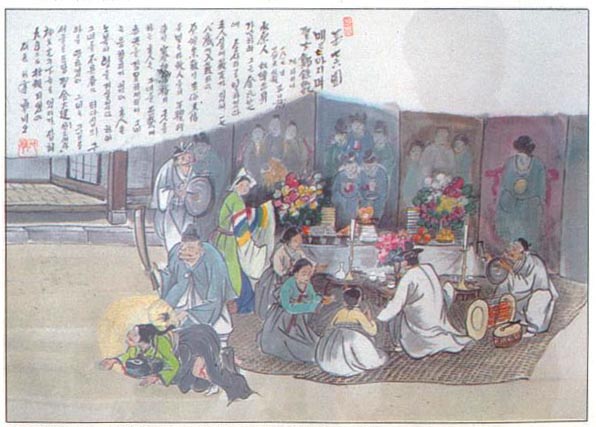 Chŏng Catharina was arrested with three other women at the home of Hyŏn Charles on July 10, 1846. Catharine was born of a servant woman. Some say that she was baptized in infancy, others that she became a Catholic when she was 16 or 18 years old. Her character was genial, but her heart was very courageous.

When she was 20 years old, her master tried to force her to take part in the superstitious winter solstice ceremony, but Catharine refused to participate. Her master, in anger, bound her arms behind her and held her over a fire. Later she was dragged out and beaten until she fainted. The same thing happened again the following spring. The wounds on her body always showed. Her face was pale and she could not do hard work.

After her wounds healed, she came up to Hanyang and hid herself in a Catholic home. She later became a housekeeper for Father Kim in 1845. Catharine was arrested with U Susanna, Kim Theresa and Yi Agatha on July 10, 1846. According to the document of the government, the pious women were tortured severely but none of them would deny their religion.

They were in prison for over two months. September 20, 1846, was a glorious day for the seven martyrs. According to the government document, they were severely interrogated and tortured and their bodies were twisted, but they would not deny their faith. Therefore, they were either beaten or strangled to death. Catharine was 30 years old, when she was martyred.