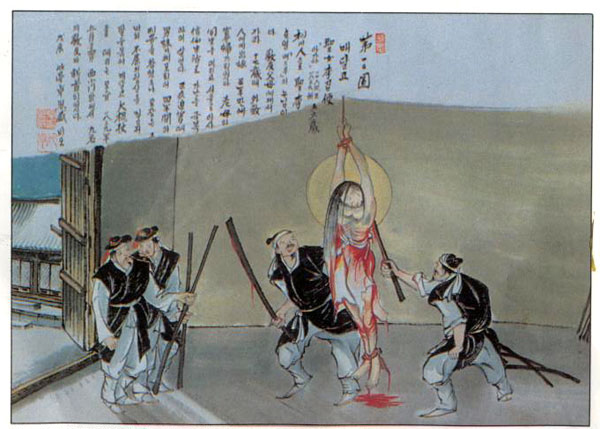 Among the seventy-nine martyrs of the persecution of 1839, the first to be captured and spend the longest time in prison were the sister and brother, Yi So-sa Agatha and Yi Ho-yong Peter.

In 1784, the year when the first Korean Catholic, Yi Sung-hun was baptized in Peking, Yi Agatha was born in Kuwul, near Inchon, Kyonggi Province.

She was warm-hearted and well mannered and always brought light and cheer to the household. However in her youth she did not receive adequate religious instruction. Her father was not a Catholic, and though her mother had been a catechumen, she did not understand much about the catechism.

At the age of seventeen Yi Agatha married into a non-Catholic family, so her life was devoid of religion. However, as she could not have children, Yi Agatha searched for some way to fill the void in her life.

Two years after Agatha's marriage her younger brother, Ho-yong, was born. Nineteen years younger than Agatha, he was a source of great joy to her. A year after his birth, her young husband died leaving Yi Agatha a widow after only three years of marriage, without even one child. This tragedy made Yi Agatha uncertain and mistrusting in her future. She felt a need to discover value and stability in life. This desire was fanned further by watching the death of her father shortly after that of her husband.

Yi Agatha strengthened her resolve and left her husband's house to go back to her parents' house. She did this to return to the source of her faith and also because she felt responsible for her younger brother Ho-yong.

Yi Agatha was most grateful that her mother had baptized her father before his death, enabling him to die peacefully. However life at home was extremely difficult. She had to take care of her mother and brother but the little inheritance her father left soon disappeared. She was forced to take in sewing to support the family.

In the midst of this Agatha never lost her serenity. She continued to study Catholic doctrine and to teach it to her brother. Together they put up with poverty and lived a life of loving God and obeying the Commandments. The example of the martyrs of the 1801 persecution and their eternal victory through death were always kept alive in their hearts. As they modeled their lives on those of the martyrs, other Catholics regarded them as a model Catholic family.

In the famous "Gihae Diary" written by Hyon Song-mun the following is recorded of Yi Agatha:

"After her father died, Agatha lost all her property. She was living with her old mother and her younger brother in extreme poverty. The difficulties that she had to endure were beyond description. Despite her poverty, she appeared always peaceful with a happy smile. It is impossible to record all her good and beautiful words and deeds. She was humble and courteous so everyone praised, loved and admired her for the beauty of her actions."

Yi Agatha was arrested by the police with her younger brother Ho-yong in February, 1835 and they both were put in prison. (See the story of Yi Ho-yong Peter in CBCK Newsletter No.30). The interrogation was conducted under torture. The police commissioner forced them to give up their faith and report the names of other believers, but they replied,

"God is our Father and we cannot betray him. If we give you the names of other believers harm will befall them, so we cannot do that either."

The commissioner commanded the torture to begin. The form of torture used was so brutal that it had been banned by royal decree in 1732 but was reintroduced especially for the interrogation of Catholics. Yi Agatha was beaten until her flesh hung loose and her legs were painfully twisted, but she remained steadfast. Since she wouldn't deny God and her faith, the executors stripped her naked, suspended her with her arms tied behind her back, and beat her all over her body with a club.

A few days later she was again brought out and beaten until her body was a bloody mess. The only words she said to the interrogator were,

"I cannot betray the Church."

The commissioner, realizing that he was not going to succeed, turned the sister and brother over to the court. The court judged the case and passed sentence. They spent the next four years in prison because the sentence was not confirmed by the king. Six months after the death of Yi Ho-yong, the order from the king to carry out the execution was handed down. On May 24, 1839 Agatha was led out, together with eight other Catholic women who had been arrested after her. They were taken to the execution site outside the Small West Gate and were beheaded. Yi Agatha was fifty-six years of age. It is said that Agatha made a sign of the cross reverently just before her head was cut off. Yi Agatha was canonized on May 6, 1984 at Yoido Plaza, Seoul, by His Holiness Pope John Paul II.