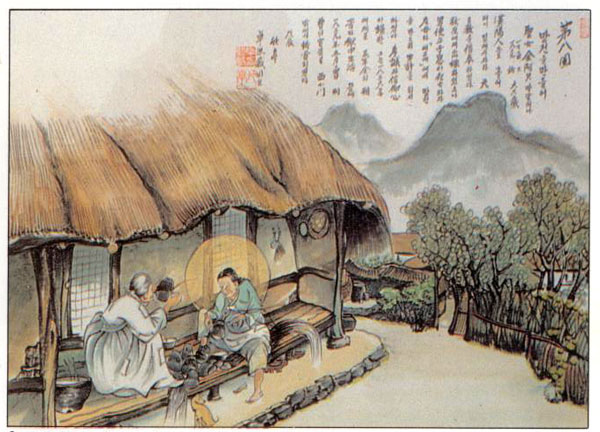 The first executions of 1839 took place at the Small West Gate in Seoul. Nine persons were martyred, of whom three were men and six were women. Three of the women, Kim Ob-I Magdalene, Kim A-gi Agatha, Han A-gi Barbara, had been arrested three years earlier and spent the intervening time in prison.

Kim Ob-I Madgalene was a Catholic from her childhood, unlike many others. She came into adulthood with a deep faith. Uppermost in her mind was the question of how to live a holy life. She fervently meditated on how she, as a woman, could best serve the Lord and made every effort to follow the teachings of the Church both in mind and body. While still young she had made up her mind to remain a virgin because it was the only way to ensure she would follow the teaching of Jesus and keep her body pure. However, this dream was not to be fulfilled. Her parents were not Catholics and they could not understand her intention. Young Magdalene could not overcome her parents' opposition and consequently got married. Due to the Lord's grace her new family was Catholic, but unfortunately, she lost her husband early and her children as well. After her mother's death, Magdalene committed herself more actively to the Church and the practice of her faith. She taught Catholic doctrine to her neighbors. Her personality was so pleasant that many people were happy to learn from her. At this time the government began to persecute the Catholic religion. She was willing to offer her life for the Church if that was what was required.

Kim A-gi Agatha was born into, and brought up in, a family that had no connection with the Catholic Church. She also married into such a family. At that time Catholic teachings were regarded as heresy after the incident in 1791, when Yun Chi-ch'ung Paul burned his ancestral tablets. It was only a matter of time that persecution broke out. In fact it came in 1801. Agatha and her husband had no occasion to learn the Catholic doctrine and, knowing the dangers involved, they showed no inclination to do so either. They stuck to Confucianism. However, one day Agatha's older sister came for a visit. She was a devoted Catholic. In the front room of Agatha's house was a large rice chestand over it the ancestral tablets. There was also a strange picture on the wall. Agatha's sister regarded these as the height of wickedness. When the opportunity offered itself she said to her younger sister,

"What on earth do you keep those things in your house for? It is useless superstition. Throw them out and do not believe in them again."

"What can I do? I am married to someone who believes in them."

"There is only one who rules over the whole world. That is Christ. It is time you also woke from darkness to learn and practice the truth."

After listening to her sister Agatha experienced a great longing. While agreeing with her sister's reasoning, she could not ignore the reality of her own surroundings. She was a woman who, up until then, had lived in a house that had no connection with the Church. However, she made up her mind to suffer willingly whatever difficulties came her way because of her decision to behave rightly in following God's truth.

Agatha came late to the study of Catholic doctrine but once she started she grew quickly in fervor. It appears she was not very bright because no matter how hard she tried she was unable to learn the morning and evening prayers by heart. In the end she became known as the woman who knew nothing but "Jesus, Mary"

Han A-gi Barbara's mother was a Catholic so she leaned about Jesus from her childhood. Due to the teaching and example of her mother she received a deeply rooted faith, but when she married an unbeliever she gave up practicing it. One day her mother came to see her married daughter, who was a constant source of worry, and met Kim Ob-I Magdalene outside the house. Being Catholics they knew one another, so Barbara? mother greeted Magdalene and grasped her and said.

"Magdelene. How have you been?"

"I give thanks to God for his grace. But what have you come here for?"

"I am here to see my married daughter, who is a constant source of worry. It is the will of God that we have met. She is more likely to listen to you than to me. Let us go in together and talk to her."

"Certainly. In fact, to tell the truth, I have been waiting for just such an opportunity."

So her mother and Kim Ob-I Magnalene urged Barbara to repent. It was a moment of grace for Barbara. She deeply repented her past sins, and from then on she worked hard to learn and practice the Church doctrine and practiced Christian virtues admirably. Barbara was thirty when she tragically lost her husband and three children. Even in the midst of this misfortune her faith did not weaken. Returning to her parents' house she taught catechumens and gave baptism to neighboring children who were in danger of death. She advised sinners to convert and lived chastely, with self-denial. (To be continued on CBCK Newsletter No.39)

Kim Ob-I Magdalene and Han A-gi Barbara were arrested together in September 1836. It is not certain whether Kim A-gi Agatha was captured with them or at her own home. In any event, the three of them were taken into custody on the same day.

In prison they found themselves in the company of several other Catholics. They were Nam Myong-hyok Damian, accused of hiding the bishop's vestments, Kwon Tug-in Peter, accused of making and selling crucifixes and holy pictures, Pak A-gi Anna, who remained in prison despite the apostasy of her husband and children and Yi Ho-yong, Peter's sister Yi Agatha.

The first to be questioned was Pak A-gi Anna. In spite of the torture she remained unbowed.

"So what if my husband and son have apostatized! I choose to keep my faith and die for it," she lightly answered the police officer.

Next was Han A-gi Barbara. No less brave than Pak A-gi Anna, her body was a bloody mess when they had finished with her. While Han A-gi Barbara was undergoing torture, Kim Ob-I Magnalene have witnessed her faith by explaining Catholic doctrine to the police commissioner. Next Kim Agatha was called.

"It is true you believe in the Catholic church?"

"I don't know anything but Jesus and Mary."

"If you could save your life by rejecting Jesus and Mary, wouldn't you reject them?"

"I would rather die than reject them."

And in spite of the tortures Agatha could not be persuaded to change her mind. Seeing this the police commissioner had them moved to prison. When the other Catholic prisoners saw Kim A-gi Agatha arriving they cheerfully greeted her.

"Here comes Agatha who doesn't know anything but Jesus and Mary," they said, congratulating her on her bravery.

Because of her inability to learn the doctrine and prayers Kim A-gi Agatha had not yet been baptized. She was the first to be baptized in prison during the persecution.

Baptism gave her new strength and with it she went on to overcome terrible torture and punishment.

After all the investigations and trials, death sentences were handed down on Nam Myong-hyok Damian, Kwon Tug-in Peter and Pak A-gi Anna on May 11, 1839. The next day Yi Kwang-hon Augustine and Pak H.I.-sun Lucy were also sentenced to death.

It took three more days of discussion before Kim Ob-I Magdalene, Han A-gi Barbara and Kim A-gi Agatha were given the sentence for believing in Catholicism and refusing to give up that belief.

Finally May 24, 1839, arrived. The events of that day are described by Cho Shin-ch'ol Charles as follows "On the appointed day ox carts, with crosses taller than the average person erected on them, were brought to the jail. When all was ready guards brought the condemned prisoners out and tied them to the crosses by the arms and hair. A foot rest was put under their feet and the signal given to depart.

When they arrived at the steep hill on which the Small West Gate is situated the guards suddenly pulled away the foot rests and the drivers urged the oxen to run headlong down. The rad is rough, with many stones. The carts lurched, causing extreme agony to the prisoners who were hung on the crosses by their arms and hair. The execution ground is a the foot of the hill. The guards took the prisoners from the crosses and tore off their clothes. The executioners tied their hair to the wooden beam and proceeded to cut off their heads."

The nine martyrs received their crown at three o'clock in the afternoon, the same time as Jesus breathed his last on the cross several tens of centuries. In accordance with the law the bodies were left at the execution site for three days.

In the court record of the time it is written:

"On April 12, Yi Kwang-hon Augustine, Kwon Tug-in Peter and others, in all none criminals, were executed for following the false religion."

"With difficulty we reclaimed the bodies at dawn on April 27. We buried the bodies of the martyrs at a place I had prepared earlier. I would have liked to have dressed the bodies in fine clothes and anointed them with expensive perfume, in the European manner. However, we are poor and to dress the bodies in this way would have been a burden on the Catholics, so we just wrapped them in straw matting. Now we have many protectors in heaven. When the day of religious freedom comes to Korea, as I know it will, these bodies will bea precious heritage."

Saint Kim Ob-I Magdalene, Saint Kim A-gi Agatha and Saint Han A-gi Barbara were beatified on July 5, 1925 and together they were canonized on May 6, 1984 at Yoido, Seoul, by Pope John Paul II.