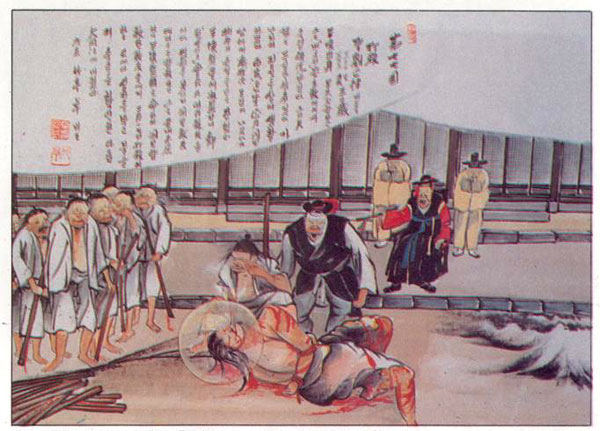 Catechist Yu Chŏng -nyul was born in 1836 at Nonje in Pyŏngyang. He became an orphan when he was a small boy. He was very poor, and he made his living by selling straw shoes. He had a very quick temper and treated his wife harshly. He was fond of gambling.

Between 1863 and 1864 he learned of the Catholic religion. In 1864, when he was 28 years old, he went to Seoul and was baptized by Bishop Berneux and received the name Peter. After Baptism his life changed completely. He treated his wife kindly and gently. As a penance for his past harshness to his wife, he used to beat himself. He also stopped gambling. He led many people to the Catholic faith by his gentle and faithful life.

In 1866, there was a rumor that there would be a persecution soon, but he lived and acted peacefully. On Lunar New Year's Day of 1866 he might have been inspired by the Holy Spirit, because he went around bidding farewell to his relatives. When he was visiting Kodunni mission station in the evening of the same day and praying with Catechist Chŏng Vincent and many other people, several policemen rushed into the mission building. Many Catholics escaped, but Yu Peter and Catechist Chŏng Vincent's nephew U Se-yong Alexius were arrested. Peter was happy for the chance to become a martyr. They were taken to Pyŏngyang and put in prison.

The governor of Pyŏngyang let some apostates beat Peter with clubs. Those apostates who refused to beat Peter were beaten by the governor's men. Yu Peter was finally beaten to death on February 17, 1866 at the age of about 30. In order to make sure that he was dead, the governor had his men burn Peter's body. Five apostates then threw the body into the Taedong River. That night Peter's wife took his body out of the water and buried him in the family cemetery.

Ten years later, in 1876, the governor ordered a stone monument to be erected by the river. Actually, this monument was to praise the governor for killing the Catholics but it became a proof of Peter's martyrdom. The monument is thought to be still standing in Pyŏngyang.