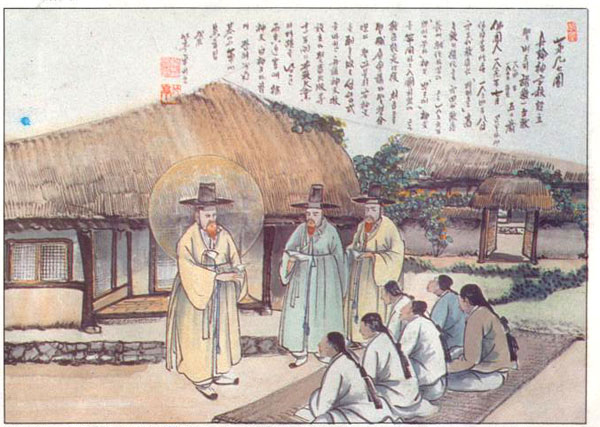 Bishop Berneux was born on May 14, 1814 in Mans, France. He came from an ordinary family. His mother was a very devout woman, and gave Simeon a good Christian education. When he was ten years old, he told his mother that he wanted to become a priest.

There were many obstacles in the way of his desire. His father was lukewarm, and his family was poor. Finally his father gave his consent and his parish priest helped him go to school. Young Berneux studied very well. He continued his studies in Mans.

In 1831, he entered the major seminary in Mans. A year after he began his studies, he fell ill. His bishop found him a job as a family tutor for two years. Later he returned to the seminary. He taught philosophy before he finally was ordained a priest on May 30, 1837. After his ordination he continued at the seminary as a professor and a spiritual director.

On July 15, 1839, Father Berneux joined the Paris Foreign Mission Society. He wanted to go to Korea which had been hard-hit by persecutions, and he left Paris on January 15, 1840.

He met Bishop Retord in Manila, who wanted to take him to Tonkin, China. They were separated on the way, and Father Berneux worked in Indochina. He was captured by persecutors and severely beaten. He was sentenced to death but was released through the intercession of a French admiral. Then he went to Singapore and on to Macao. He worked in China so hard that he fell ill many times. On August 5, 1854, Father Berneux was appointed by Pope Pius IX as the fourth Vicar Apostolic of Korea, succeeding Bishop Ferreol.

Bishop Berneux was very happy to go to Korea, "a wonderful country of martyrs", as he exclaimed. Bishop Berneux together with Fathers Charles Antoine Pourthie and Michel Alexandre Petitnicolas waited for about two months. At last they were successful in obtaining passage on a boat owned by a Korean Catholic, and four days later they were safely in Seoul.

The tireless Bishop Berneux immediately started his pastoral work. He built a seminary in Baeron to educate future priests. He also started publishing Catholic books. He named Father Antoine Daveluy a coadjutor bishop. He was a kind and merciful father as well as a great leader. The number of the Catholics increased tremendously.

Bishop Berneux was arrested and sent to prison on February 23, 1866. Fathers Dorie, Beaulieu and De Bretenieres were also arrested and put in the same prison with Bishop Berneux. After severe tortures they were sentenced to death on March 6, 1866. The next day they were beheaded at Saenamteo. They were happy to die for the faith in this country. It has been said that Bishop Berneux had a mysterious smile on his face when he died. He was 52 years old.