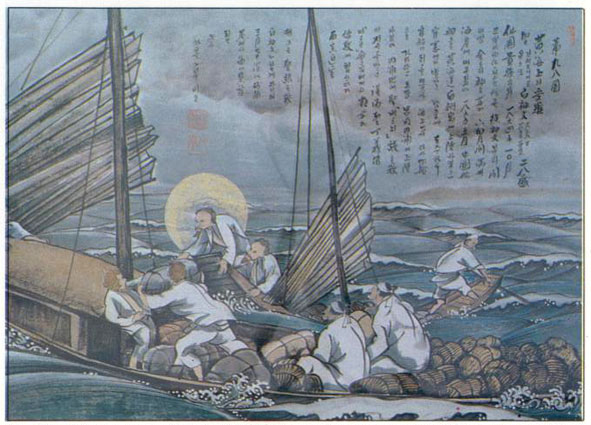 Father De Bretenieres was born in Chalonsur-Saone, France on February 28, 1838, the son of Judge De Bretenieres (Baron) and his wife Anne who were not only good Catholics but also did many charitable works. They were interested in giving religious education and discipline to their children. Consequently, young De Bretenieres had an ardent desire to become a foreign missionary in China from the time he was three years old. He also expressed the desire to his brother and to his parish priest that he wanted to become a martyr.

In 1859 De Bretenieres entered St. Sulpice Seminary in Paris. He was loved and admired by everyone around him. In September of 1861 he moved to the seminary of the Paris Foreign Missions Society. One of his friends admired him so much that he said De Bretenieres would become a saint even without martyrdom. In May of 1864 he was ordained a priest.

When they reached Hong Kong, their assignments were officially announced. They were supposed to go to Manchuria to wait for a chance to enter Korea. On October 28, 1864 they arrived at a seaport in Manchuria and waited for six months for a Korean boat to take them to Korea. While they were waiting there, they studied the Chinese language.

In May of 1865, Chinese sailors took the missionaries to Baengnyeong-do on the west coast of Korea, where they stayed for 20 days. Since the boats Bishop Berneux sent for the missionaries did not reach the island, they moved with all their luggage to a tiny Korean sailboat. After much suffering from storms on an open deck, they arrived at Naepo in Chungcheong-do on May 27, 1865.

It was hard for them to contact Bishop Berneux in Seoul. However, Bishop Daveluy, who had hidden himself in Naepo after his house was burnt down, helped the new missionaries to find their way. Father De Bretenieres met Bishop Berneux in Seoul, and later settled down at the home of catechist Cheong Ui-bae to study the Korean language until the end of February of 1866. Soon Father De Bretenieres started his ministry. He heard about 80 confessions and baptized more than 40 adults. He also administered Confirmation and the Sacrament of the Sick.

He was put in the same prison with Bishop Berneux. Both of them were sentenced to death on March 6, 1866. The following day they were taken to Saenamteo by the Han River, and there they were beheaded. Just before Father De Bretenieres was killed, he asked for water to quench his thirst, but his last wish was refused. He was 28 years old.