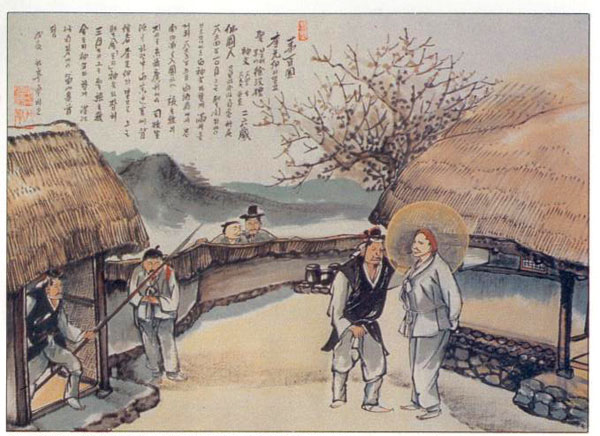 Bernard Louis Beaulieu was born on October 8, 1840 in Langon, France, the son of a 19-year old mother. His father had died five months after the marriage. His mother was a very devout woman and dedicated her son to the Blessed Mother. She later married Mr. M. Dufour, a widower and the father of a daughter, for the purpose of giving an education to her son.

Young Louis started to serve as an altar boy at the age of seven. His teacher recommended him for the minor seminary in Bordeaux in October of 1849. He met a missionary who had worked in Sutchen, China for a long time, and began to dream of becoming a missionary in a foreign land.

In 1857, Beaulieu entered the major seminary in Bordeaux. While he was studying there, he lost one of his best friends, Amelien Virac, and also his mother on November 7, 1858. These tragedies helped Beaulieu to make up his mind to become a missionary.

Beaulieu had to wait for four more years before he became a missionary. His spiritual director and the archbishop of Bordeaux did not easily grant him permission. At that time Beaulieu had not reached the canonical age for ordination. While he was waiting to be ordained, he taught in a local minor seminary. In March of 1863, he was very sick of pneumonia and his desire to become a missionary seemed to vanish. But after his archbishop gave him permission to become a missionary, Beaulieu recovered from the illness.

Despite the opposition of his uncle, who was like his own father, Beaulieu entered the seminary of the Paris Foreign Mission Society on August 27, 1863, and finally was ordained a priest on May 21, 1864. He was assigned to Korea on June 15, 1864.

He left France on July 15, 1864, and arrived in Korea on May 27, 1865. He was welcomed by Bishop Berneux. The bishop sent all young missioneries to mountain villages in order to avoid danger. Father Beaulieu was sent to a village near Father Dorie. They met each other frequently for confessions. When they traveled, they went at night in the Korean mourning costumes which covered their whole bodies and faces. They also encouraged each other to be faithful to the Lord in their ministry.

Father Beaulieu could speak Korean well, so Bishop Berneux decided to send him to Kwangju, southeast of Seoul. But Father Beaulieu was arrested on February 27, 1866, before he could leave for his destination. After severe tortures and sufferings he and the other missionaries were beheaded at Saenamt'o on March 7, 1866. Father Beaulieu was 26 years old when he was martyred.