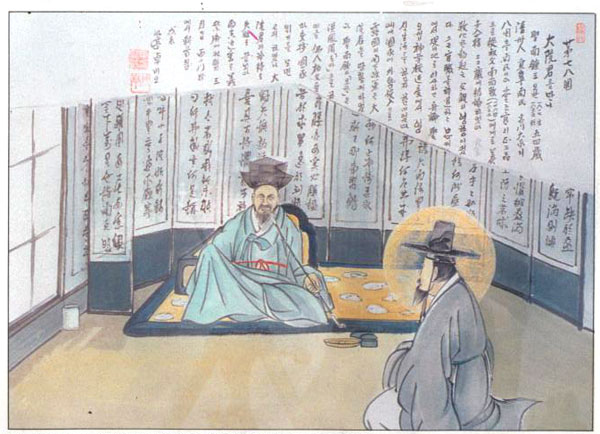 Nam Chong-sam John was born in Cheongju in 1812. He was a nephew and an adopted son of Nam Sang-gyo Augustine, a high ranking government official. Nam Augustine refused to continue working for the government because he thought it was not good for his life of faith. Nam John, however, was anxious to be a high official of the government. At the age of 26, he passed the examination of Hongmungwan Kyori, and at the age of 39 he became the governor of the coastal area facing the Japanese coast.

It was difficult for a Catholic to be a government official. Nam John was supposed to take part in or sponsor superstitious ceremonies required by the government. He also had to attend Kisaeng parties. All these things were not good for a life of faith, but John could not leave the government position because he had to support his many relatives. He tried to keep away from superstitious ceremonies and to live according to his faith and conscience as much as possible. He also tried to help poor people. After a few years, however, John resigned from his position as a regional governor, returned to his home and taught foreign missionaries the Korean language.

In 1863, his financial situation became difficult again, and he went to Seoul and became the king's Sungji, the teacher of the Chinese literature for the children of high ranking ministers of the government. Because of this he had frequent occasions to meet the Lord Regent.

In 1866, a Russian ship invaded Hamgyong Province. Everybody in the government was upset and didn't know what to do. The government officials thought that the French or English in Peking might be able to expel the Russians. The Lord Regent's wife, Min-ssi, a great friend of the Catholics, suggested that some French missionaries who were already in the country could be contacted through Sungji Nam Chong-sam. The Lord Regent asked Nam John to bring Bishop Berneux to the royal palace so that he could influence the French people in Peking.

When John was looking for Bishop Berneux, the bishop was in Pyongyang. When the bishop returned to Seoul, the Russians had already left. This incident backfired and created an occasion for a persecution. High government officials who were displeased because Catholic influence infiltrated the royal palace strongly urged the Lord Regent to resume the persecution.

Nam Chong-sam John was arrested on March 1, 1866, and was imprisoned. After suffering much from torture, he was sentenced to death and was beheaded outside the Small West Gate on March 7, 1866. He died calling out the names of Jesus and Mary. John was 50 years old when he was gloriously martyred.