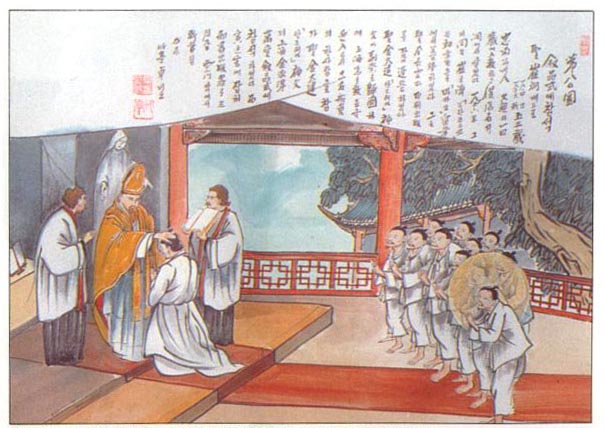 Ch'oe Hyŏng Peter was born in Kongju in 1809. His father, who was baptized at the age of 20, had three sons. The whole family was dedicated to God. Peter, who had studied Chinese literature since boyhood, had to support his poor family by farming.

After Father Maubant came into the country in 1836, Peter became his assistant. He helped Father Maubant devotedly until the priest was martyred in 1839. Peter and his father were arrested and tortured in 1840, but they bribed their captors and were released from prison.

Peter was one of those Catholics who crossed the Yellow Sea in a wooden boat with Deacon Kim Tae-gŏn Andrew, and took part in Andrew's ordination in Shanghai. They returned to Korea in the same wooden boat with Father Kim Andrew and also with Bishop Ferréol and Father Daveluy who had been waiting in China.

After his return to Korea, Peter used to help Father Kim Andrew. He married at the age of 36, and lived in a southern suburb of Seoul, translating religious books and making rosary beads. As he was known to be very devout, even many non-Catholics, catechumens and new Catholics used to come to him to seek his advice. Although Peter was not a catechist, Bishop Berneux gave him authority to baptize. The Bishop also put him in charge of a printing shop. Peter worked hard in the position for four years and published many Catholic books.

When Bishop Berneux was arrested, the captors tried to arrest Peter also. But Peter, with his daughter and son-in-law, escaped. He was arrested later and severely tortured. He courageously professed his faith. He was beaten so hard that his leg bones could be seen. On March 9, 1866, a few days after Bishop Berneux was martyred, Peter was beheaded outside the Small West Gate together with Chŏn Chang-un John. It is to be noted that Ch'oe Hyŏng Peter received much more severe tortures than other martyrs. Peter was 53 years old when he was martyred.