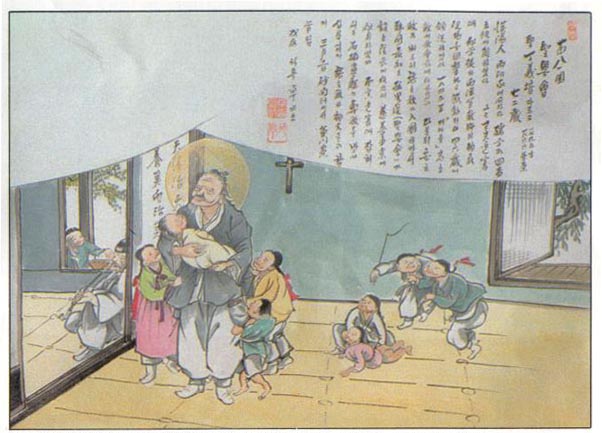 Catechist Chŏng Ŭi-bae Mark was born in 1794 in Gyeonggi Province of a noble family who despised Catholics. Mark finished studying for the government examination and was teaching children. He married, but his wife soon died, and Mark lived for many years as a widower with no children. In 1839, he happened to see Bishop Imbert and Fathers Maubant and Chastan being martyred. Mark, who had thought that the Catholic religion was a heresy, was surprised to see the missionaries dying with such great joy. He began to read some Catholic books, and became convinced that being a Catholic would help him be a better man. He went to Seoul to be baptized. Bishop Ferreol, who came into Korea in 1845, made him a catechist. Catechist Mark performed his duties so faithfully until his death that Bishop Daveluy declared that he was a living saint, and Bishop Berneux said that he would be happy to be in Heaven together with Catechist Mark. Mark used to lead the Catholics and catechumens well and take care of sick people and orphans. He led a poor life intentionally with his second wife P'i Catherine. Since they had no children, they adopted their nephew P'i Paul, who taught Korean to Father Breteni뢳es, while he was staying in their house.

Catechist Mark always practiced his religion faithfully and his will was very strong. Everyone around him loved and respected him. He always preferred being martyred to dying at home. Father De Breteni뢳es used to praise his devout attitude at Mass in front of the people.

When the persecution broke out, Mark helped others escape but he himself did not escape. When he was arrested on February 25, 1866, he showed great joy. He was then 72 years old. He spent a few days in prison with four French missionaries. After severe tortures, he was beheaded at Saenamteo on March 11, 1866.