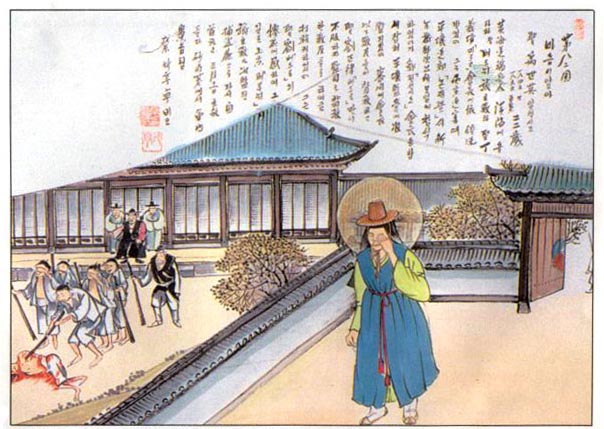 U Se-yŏng Alexius was born in 1845 at Seoheung in Hwanghae Province. He was the third son in a wealthy noble family. He received a systematic education with his brothers. Alexius was very intelligent and was ready for the government examination at the age of 16. By that time he heard about the Catholic religion from Catechist Kim John. He asked his father for permission to be baptized, but his father strongly disapproved. Alexius secretly ran away to meet Bishop Berneux in a remote Catholic village. The bishop sent young Alexius to Catechist Chŏng Mark for spiritual guidance before baptism. Bishop Berneux finally baptized U Se-yŏng personally in 1863 and gave him the name Alexius. When he returned home after baptism, he was treated very harshly by his family but he endured all difficulties patiently.

Alexius asked his father for permission to live independently of the family. His father said that it would be better that way, and Alexius went to Seoul and stayed with Catechist Chŏng Mark, praying for the conversion of his family. He also translated catechism books and edited the 12 Important Prayers.

Meanwhile, Alexius' father wanted to know about the Catholic religion. Alexius went back home to give instructions to his family. Twenty people, including Alexius' whole family and neighbors, were baptized. Since the family's religion became well known in the region, they had to move to Nonjae in Pyŏngyang.

On lunar New Year's Day of 1866, Alexius went to Catechist Chŏng Mark for the traditional greeting. The police attacked the village and arrested all male Catholics including Alexius. He was forced to deny his religion and was released from prison but he immediately repented and began fasting for penance. He burnt all his possessions and went to Bishop Berneux in prison to confess his sins of denying God in Pyŏngyang, beating Catechist Yu Chŏng-nyul Peter to death and throwing his body into the Taedong River. After absolution, Alexius was arrested and endured torture courageously. This time he did not deny his faith.

On March 11, 1866, Alexius was beheaded in Saenamteo. Until the last moment, he was tempted by the persecutors to deny his religion but he refused to deny God. Alexius was 22 years old, when he was martyred.