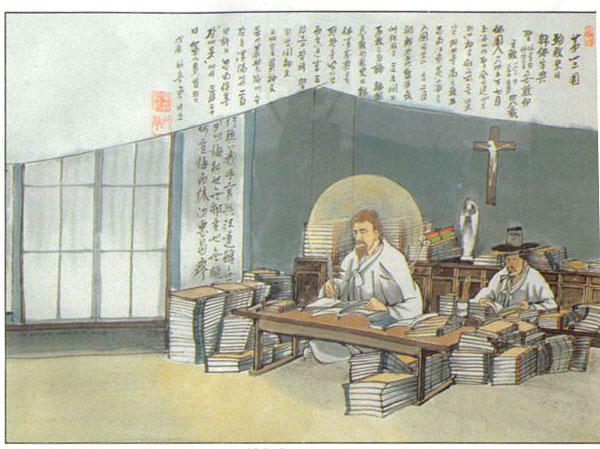 Marie Nicholas Antoine Daveluy was born on March 16, 1818, in Amiens, France, of an influential family.

His father was the owner of a factory and a town council member as well as a government official. His family was well known in the town for devotion and faith. Three sons of the family became priests. At the age of seven Antoine began to study Latin and in 1827 he went to a Jesuit school. After the Jesuit school had been closed by the king's decree, Antoine went to a grammar school. He made up his mind to become a priest when he was in the second grade. He finally entered St. Sulpice Seminary near his home town in October 1834. He wanted to become a Jesuit priest despite his poor health.

In October 1836, Antoine went to St. Sulpice Seminary in Paris for further studies. In 1841, he was ordained a priest and was assigned to the parish of Roye as an assistant priest. After successful work in the parish for 20 months, Father Daveluy joined the Paris Foreign Mission Society in October 1843.

In February 1844 Father Daveluy left for Macao and arrived there six months later. Meanwhile Bishop Ferreol was attempting to go to Joseon. The bishop persuaded Father Daveluy to go along with him. In Shanghai, Bishop Ferreol and Fathers Kim and Daveluy left for Korea in a small wooden boat. They safely arrived at Ganggyeong in Chungcheongnam-do after a long, stormy voyage.

Father Daveluy started his pastoral work in 1846. He administered the sacraments to more than 700 Catholics in the first two months, and later baptized more than 1,700 in two years. Due to the unhealthy environment his poor health became worse. During his illness he taught Latin to young seminarians. During this time he wrote a Korean-French Dictionary, which was lost during the persecution in 1866.

Bishop Berneux, who succeeded Bishop Ferreol in 1856, made Father Daveluy a coadjutor bishop as soon as he arrived in Korea. He was consecrated a bishop in a private house on March 25, 1857. He volunteered to take care of the more difficult remote areas. He also printed and published Catholic books. Most of the Catholic history books available today were written by him. After Bishop Berneux was martyred in February 1866, Bishop Daveluy became the fifth Vicar Apostolic of Korea for a short period of 23 days.

It was decided that the site for execution of the death sentence should not be in Seoul but in Galmaemot, a naval base in Chungcheong-do, about 100 kilometers away from Seoul, because the king was sick and was getting married. He did not want to have the missionaries' blood shed in Seoul. By his own request, Bishop Daveluy was beheaded on Good Friday, March 30, 1866, at Galmaemot, with his companions, Father Aumaitre and Father Huin. He was 49 years old.

For three days the bodies of the three martyrs were abandoned on the beach but it has been said that their bodies were not corrupted until their burial. On the third day, non-believers in the neighborhood buried them.

In mid- June of that year, believers moved their bodies to Sojukgol in Hongsan, about 1,000m from Galmaemot, and buried them there.

Daveluy came to Korea with Bishop Ferreol and spent his life spreading the Gospel for 21 years in Korea. He wrote biographies of martyrs and collected materials on the history of the Church. He prepared many books on religious teachings. He was assistant bishop for nine years under Bishop Berneux, and after Berneux' death, he was appointed the fifth bishop of Korea.

The remains of the three martyrs were transferred to Nagasaki in 1882 but were moved again to Yongsan Seminary on May 22, 1894. On September 10, 1900, they were placed in the basement of Myongdong Cathedral. They are now preserved in the crypt of Jeoldusan Church.

These glorious martyrs were beatified at St. Peter's, Rome, by Pope Paul VI on October 6, 1968. They were listed among the saints on May 6, 1984. They are honored by all who believe in the Lord.