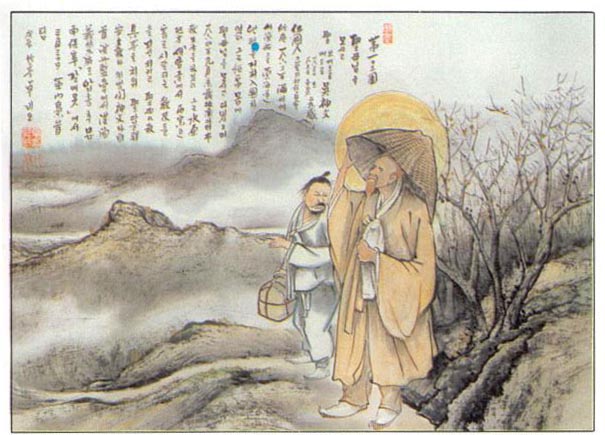 Pierre Aumaître was born on April 8, 1837, in the small village of Angouleme, as the first of five brothers. His father was a small farmer and shoemaker. He and his wife were devout Catholics. Young Pierre was a very good boy, but not so intelligent and had a poor memory.

Pierre wanted to be a priest, but his pastor thought he could not make it. In the meantime the pastor was changed. The new pastor refused to teach him Latin. But Pierre went to a lay teacher living four kilometers away to study Latin. Every morning Pierre ran to his Latin teacher. The pastor admired Pierre's diligence, and recommended to the bishop that he be admitted to the minor seminary in Richemont in 1852. Although his memory was poor, he studied hard and became one of the best students. He had a strong will.

Pierre entered the major seminary in Angouleme in 1857. Even his superiors admired his exemplary life. His obedience was complete. When he was in the first year of philosophy, he told his spiritual director that he wanted to be a missionary. In 1859 he was admitted to the seminary of the Paris Foreign Mission Society. After three years of studies and spiritual training there, Pierre was ordained a priest in June 1862. He arrived in Korea on June 23, 1863.

He first stayed in Saemgol to study the Korean language, and later moved to Naepo near the place where Bishop Daveluy was staying. All the Catholics loved Father Aumaître and admired his goodness and kindness. Bishop Berneux once wrote about him, saying, "This little priest is working little miracles, and excellently teaching his people devotion to the Eucharist and Mary."

When the persecution began, Father Aumaître told his people that it was time to profess the Catholic faith publicly to non-Catholics. He went to the village of Bishop Daveluy and surrendered himself there to the police. He was sent to Hongju first together with Bishop Daveluy and Father Huin and then to the Seoul prison. They endured severe interrogations and tortures. Father Aumaître was beheaded, right after Bishop Daveluy, in Galmaemot on March 30, 1866. His age was 29. Father Aumaître gave encouragement to others while he was being executed. It has been said their bodies were not corrupted until their burial and that they had gentle smiles on their face.