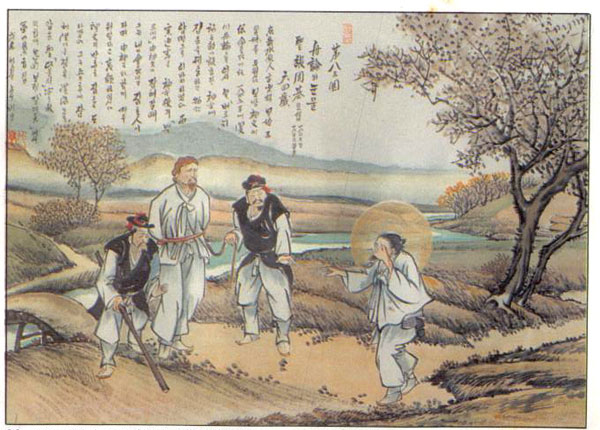 Catechist Chang Chu-gi Joseph was born in 1802 of a rich family in Suwon. Chang, learned in Chinese literature, was instructed by his sister-in-law. When he was ill in Yangji at the age of 26, he was baptized by Father Yu Pang-ji Pacificus, a Chinese and the second priest to come into Korea. He also had his wife and children baptized.

Father Maubant, martyred in 1839, acknowledged Joseph's devotion and faithfulness and named him a catechist. Joseph performed his catechist duties faithfully until his death.

He lived in Paeron in Chech'ŏn away from persecutions for 12 years. When Father Ambroise Maistre opened the first seminary in Paeron in 1855, Joseph gladly offered his house for the seminary. When Father Charles Antonine Pourthi?took over the seminary a year later, Joseph worked as a caretaker. Joseph rendered outstanding service to the seminary and to the Catholic community for 11 years. He worked hard and received no reward.

When the police rushed into Paeron on March 1, 1866, he didn't hide himself. He was arrested with the missionaries. Father Pourthié tried to bribe the prosecutors to have Joseph released, but Joseph didn't want to leave the priests. When the prisoners were about to be sent to Seoul, Father Pourthié insisted on having Joseph released, and Joseph returned to Paeron weeping. Five days later Joseph was trying to buy rice in Norukol, and the police arrested him and sent him to the governor of Chech'ŏn. Joseph admitted that he was the owner of the seminary building in Paeron.

The governor wanted to save his life and tried to persuade him to deny his faith. But Joseph didn't give in to the temptation. The governor finally sent him to Seoul. After severe tortures, Joseph was sentenced to death on March 24, 1866. He was beheaded at Kalmaemot (a naval base in Ch'ung-ch'ŏng Province) on Good Friday, March 30, 1866. Thus the seminary in Paeron (1855-1866) came to an end. Joseph was 64 years old when he was martyred.