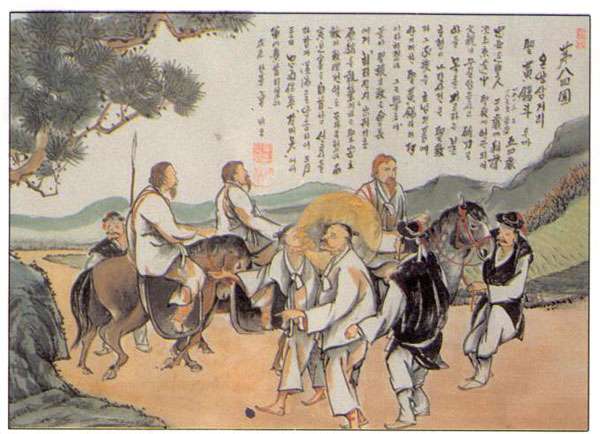 Catechist Hwang Sŏk-tu Luke was born at Yŏnp'ung in Ch'ungch'ŏng North Province in 1811, the only son of a wealthy noble family. His father let him study to pass the government examination for the glory of the whole family.

At the age of 20 he left for Seoul for the examination. He met a learned Catholic in an inn on his way to Seoul. Luke heard from him about the wonderful Catholic religion and he was deeply moved. He received some Catholic books. He returned home three days after he left. He told his astonished father that he had already passed the examination. What he meant was that he had passed the heavenly examination. Luke was severely beaten by his father but he continued studying the Catholic faith.

Luke converted his wife to the Catholic Church. His father threatened to kill him. In response to this threat Luke pretended to be a mute for more than two years. The whole family tried to heal his dumbness but failed. His father and the rest of the family were worn down and were finally persuaded by Luke to study the catechism and become Catholic.

Even non-Catholics admired Luke's devotion and faithfulness as well as his wonderful personality. When Bishop Ferr럒l came to Korea, Luke made up his mind to serve the Church for the rest of his life. He received the bishop's permission to live separated from his wife. The bishop decided to make Luke a priest. However, the Holy See did not approve the bishop's plan because there was no convent for Luke's wife to enter.

After his father passed away, Luke's relatives took all his properties from him. Father F럕on made him a teacher of Chinese literature and also a catechist. Luke performed his duties as a catechist admirably. He finally became an assistant to Bishop Berneux and Bishop Daveluy. He wrote many books with Bishop Berneux.

When Bishop Daveluy was arrested, he asked his captors not to arrest Luke. Luke insisted on being arrested with the bishop. They were all sent to Seoul.

In prison Catechist Luke preached the Catholic religion to his prosecutors, who admired his knowledge and eloquence. On March 30, 1866, Luke was sentenced to death and was beheaded at Kalmaemot (a naval base in Ch'ung-ch'ŏng Province) following Bishop Daveluy and two other missionaries. He was 54 years old.