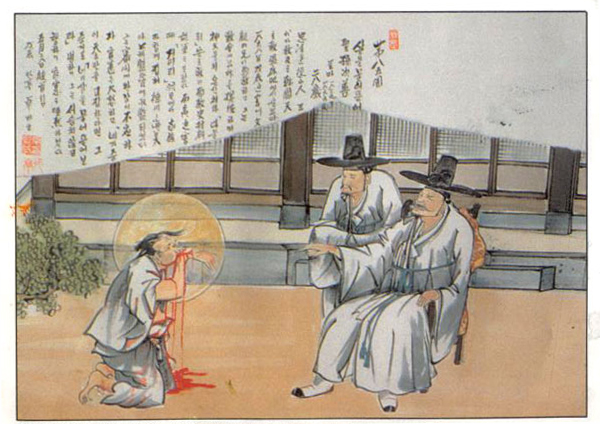 Son Cha-soun Thomas was born in 1836 at Hongsoung in Ch'ungch'oung Province. He came from a very devout Catholic family of martyrs. When he was 23, the persecution of 1866 broke out. Thomas was very diligent and devout and was known as a man of strong faith. He and his wife never omitted morning and evening prayers. His family life reflected the tradition of his family's deep faith and was in itself a profession of faith.

On March 11, 1866, a few days after Bishop Daveluy was arrested, some police rushed into the village where Thomas lived. They looted the property of the Catholic families. Because of the strong protests of the Catholics, the governor of the district promised to make reparation for the looting. Thomas went to the Touksan district office to present a claim for the looted property. The governor demanded that he renounce God. Thomas refused, saying: "I am afraid to die, but I am more afraid to deny God."

Thomas was arrested on the spot and was severely tortured. He was hung upside down and was severely beaten. A lot of garbage was put in his mouth. All these tortures couldn't force him to deny God.

His wounds were so severe that he almost died. The people in the prison tried to help him, but in vain. Thomas said: "Jesus and Mary will come and heal my wounds." A few days later his wounds were miraculously healed.

The governor of Touksan sent Thomas to the prison in Haemi. There he was tortured again. His legs were twisted and broken. The governor of Haemi forced him to bite flesh from his own hands, but Thomas wouldn't deny his faith. The governor finally sent him to the governor of Kongju to be sentenced to death.

Meanwhile Thomas' uncle, who had denied his faith, tried to persuade Thomas to deny his faith but Thomas was steadfast. He never omitted his prayers and fasted and abstained even in prison. The governor of Kongju beat him until he lost consciousness, but Thomas wouldn't deny God. The governor finally strangled him to death on May 18, 1866. Thomas was 28 years old at that time. Thomas' body was buried ten days after his death but it has been said that his body was not corrupted.