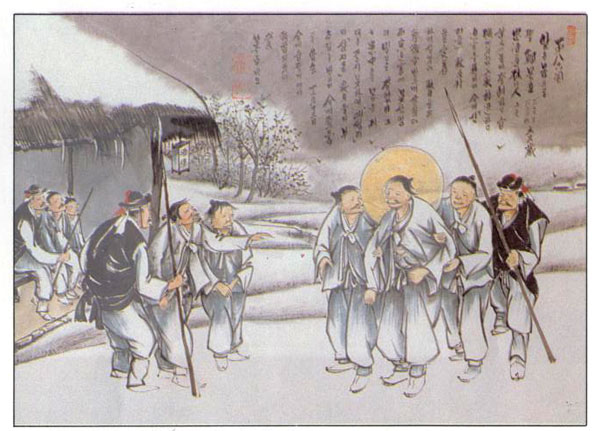 Cheong Mun-ho Bartholomew was born in 1801 at Imcheon in Ch'ungch'eong Province, and lived in Cheolla Province. Before he was baptized, he had been the governor of a region. When the new persecution broke out, he was 65.

After baptism Bartholomew resigned from all public offices. His character was so good that he was loved and respected by all, Catholics and non-Catholics alike. He taught people catechism. This is another reason why he was highly esteemed.

When Bartholomew heard the news of persecution in Cheolla Province, he sent a messenger to Cheonju to confirm the news. The messenger happened to be a non-Catholic. Before the messenger returned, a group of police rushed into the village where Bartholomew lived and arrested him together with six other Catholics on December 3, 1866.

When the seven were led to a regional prosecutor's office, they appeared very happy. They were put in a storeroom. Bartholomew was strongly tempted to renounce his faith, but his companions, particularly Cho Peter, encouraged him. Bartholomew repented and remained steadfast. He prayed hard and endured tortures and sufferings with courage. He told the prosecutor that he would rather die than deny God. He looked very happy when he was taken to the death site on December 13. The executioners were surprised to hear him murmuring prayers. On his way to Supjeong-i in Cheonju for martyrdom, he said to Cho Peter: "Today we are going through the heavenly examination. What a happy day indeed!" He compared martyrdom with officialdom in Heaven. Bartholomew was beheaded at Supjeong-i in Cheonju on December 13, 1866, at the age of 65.