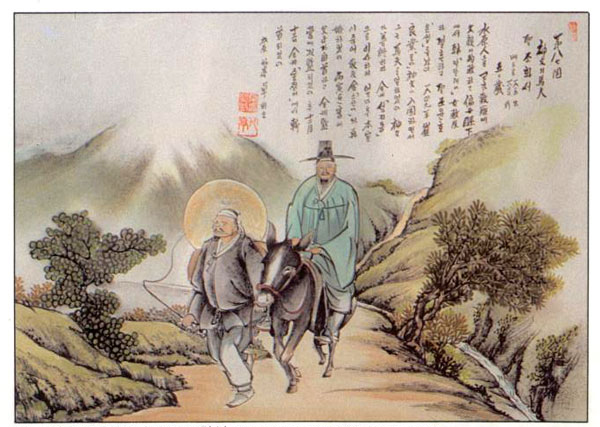 Peter Cho Hwa-so was born in Suwon in 1914, the son of Andrew Cho who was martyred in 1839. Later he moved to Sinchang in Chungcheong Province and worked as an assistant to Father Thomas Choe Yang-eop. In 1864, he moved to Jeonju for farming. He married Magdalene Han, and they had a son, Joseph Cho. After his first wife died, he married Susanna Kim. He was about 40 years old when a new persecution broke out.

Peter was a light-hearted man. He tried his best to live like a Catholic, fulfilling his duties faithfully. He was well-known for listening to and understanding others.

Peter lived in a mountain area so remote that it was difficult to hear outside news. On December 5, 1866, when Peter was visiting his neighbours with his son Joseph, a group of police rushed in and arrested Peter. He told his captors that he was a Catholic and had learned the catechism from his father. He said that he knew no other Catholics except his son.

When his son Joseph returned home, Peter urged him to run away. Joseph would not flee but surrendered himself to the captors. The two were taken to Chonju and joined other Catholics in prison. On their way to Jeonju, Peter and his son encouraged each other to be steadfast in their faith. Even non-Catholics who heard them admired their strong faith.

Peter encouraged his cellmates in prison to accept martyrdom and to be ready for death. For this he was more severely tortured than others. It is a known fact that Peter encouraged Bartholomew Cho not to give up his faith, saying" "We will be abundantly rewarded in heaven." He reminded his son that they would meet each other in heaven. He was tortured again and again for denying that he knew other Catholics and that he had some western books.

When he reached the execution site, he made the sign of the cross slowly and devoutly and told the executioners to believe in God. Then he was beheaded at Supjeongi in Jeonju on December 13, 1866, at the age of 52.