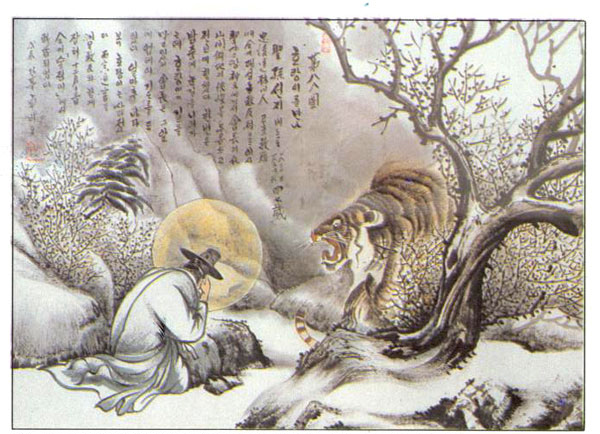 Catechist Son Seon-ji Peter, one of Korea's heroic martyrs, was born in 1819. He encountered persecution at the age of 47. He was married at that time and had two children. Although Peter was not a born Catholic (His father was just a catechumen when Peter was born), he was baptized in infancy and taught by his father about doctrine and devotional life.

From the time when he was 16 years old, his virtues were well-known among his neighbors. As soon as he became an adult, Father Chastan made him a catechist. Peter carried out his duties as a catechist very faithfully until his martyrdom.

At Taeseongdong in Cheongju, where Peter was living, his house was used as a mission station where he baptized and taught people. Many people came to his house to pray.

In autumn of 1866, during the harvest season, Peter was surprised to hear a group of firewood gatherers passing by his house say that there would be very severe persecutions soon. On Sunday, December 3, 1866, when the Sunday prayers were over, he heard someone calling his name outside the house. After he had helped his wife and children to escape through the back door, Peter was arrested by the police.

In the meantime, Peter's mother, who was not Catholic, went to the governor and begged him to save Peter's life. The governor's aides insisted that Peter would first have to deny God, but Peter would not do so.

On the next day Peter and a group of seven other prisoners went to the Cheongju prison. Severe tortures could not make him renounce his religion. The prosecutor knew that Peter was a catechist, and therefore he was tortured more severely. His arms were broken, and he could not eat or drink without someone else's help. He endured all the tortures and sufferings peacefully.

When he was about to leave for martyrdom, Peter gave his clothes to one of his cellmates. Just before his execution he offered prayers, and he was heard murmuring the names of Jesus and Mary. He was beheaded at Supjeong-i in Cheonju on December 13, 1866, at the age of 47.