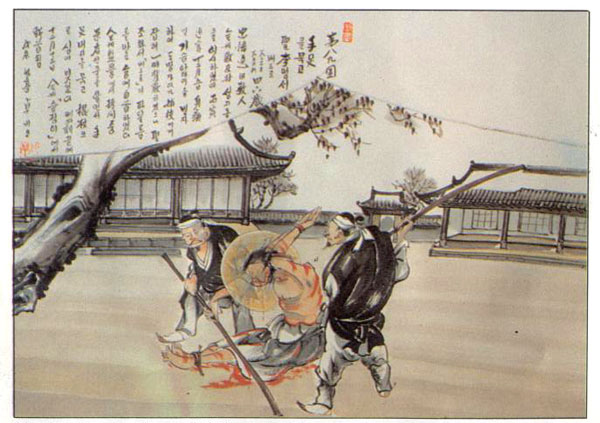 Yi Myo˘ ng-so˘ Peter was born in 1820 in Ch'ungch'o˘ng Province of a traditionally Catholic family. After wandering around different places, he settled down in Cho˘ nju. Peter, who was married and had many children, led a very devout life and was loved and respected by the people around him. Although he suffered from tuberculosis, his character was always calm and gentle.

Peter begged his captors to release him because he had tuberculosis. One of the older ones let him go. The next morning another group arrested him and asked him who had taught him catechism. Peter said that his father had taught him.

Peter was taken to the governor's office and was asked to deny God. He would not succumb, saying: "I will believe in God, even if I have to die more than 50 times." He was severely tortured for refusing to reveal the whereabouts of his fellow Catholics. His body was twisted.

The Catholics in prison were weakened by tortures and poor food, but they endured all these hardships courageously. They prayed together in prison. On the way to the execution site, they were all happy that they were finally going to Heaven. Peter told the people around him that after martyrdom he would go to Heaven immediately. Even the non-Catholic bystanders admired his happiness and courage. Peter was finally beheaded at Supjo˘ng-i in Cho˘nju on December 13, 1866, at the age of 46.