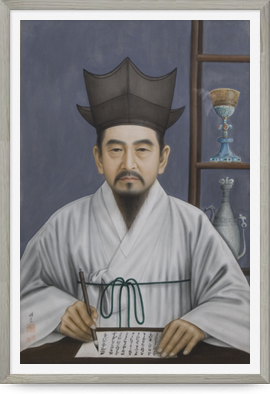 Father Thomas Choe Yang-eop was born on March, 1821, in the Catholic village of Saeteo, which was in the vicinity of Darakgol, Cheongyang, Chungcheong-do, as the eldest son of Saint Francis Choe Kyeong-hwan and the Blessed Mary Yi Seong-rye. Thomas Choe, who spent his early childhood in this place, followed his father from place to place as he tried to avoid the persecution and, finally, moved to Surisan in Anyang, Kyeonggi-do. This village of Surisan was later transformed into a secret Faith community through the coming together of Catholics in ones and twos. Choe Sang-jong, <Personal History of Basil Choe U-jeong> (Transcript), 1939,

At the time that the Surisan community was formed and growing, the Paris Foreign Missions Society, which had been entrusted with the evangelization of the Joseon Vicarate Apostolic, was attempting to send missionaries to Korea. However, because border surveillance was strict and, in addition, there was danger of persecution, it was not easy for western missionaries to enter Korea. The very first missionary to overcome the obstacles and to enter Korea was a priest, Saint Peter Maubant, who had been born in France.

Towards the end of 1835, Father Maubant, who had been guided into the country by the secret envoys sent by the Korean Catholic Church, immediately began to travel around the Christian communities throughout the country. In the beginning of the following year, he visited the Bupyeong community and selected, as a seminarian, Thomas Choe who was a fifteen-year-old boy with bright prospects.

On February 6, 1836, the chosen seminarian, Thomas Choe, arrived at the house of Father Maubant in Seoul and began to receive Latin language lessons. Francis Xavier Choe Bang-je and Andrew Kim Dae-geon, also picked by Father Maubant as seminarians, arrived on March 14 and July 11, respectively, and they all lived together.

Studies in Macao and Order of Deacon :

On December 3, 1836, Thomas Choe and his fellow seminarians placed their hands on the Bible, took an oath of Obedience and set off on the road to study in Macao. They travelled south through the mainland of China and reached the Far Eastern Headquarters of the Paris Foreign Missions Society in Macao on June 7 of the following year. From then on, they studied at the temporary seminary there.

His studies were to continue until 1842 but, in November 1837, he was stricken by the death from fever of his companion, Francis Xavier Choe. Then, in 1839, due to disturbances in Macao, he moved to Manilla and continued his studies but returned to Macao at the end of the same year.

In April, 1842, even before he had finished his studies, Thomas Choe had to leave Macao because France, which wanted a trade agreement with Korea, needed an interpreter on board its fleet. Father Napoleon Libois, superior of the Far Eastern Headquarters at that time, who was waiting for news of the Korean Catholic Church because contact had been broken off due to a persecution, managed to get Thomas Choe and Andrew Kim on board two different French ships. However, the French fleet, after arriving at Nanjing, did not wish to proceed any further north, so Thomas Choe and Andrew Kim disembarked and went to Liaodong in order to find a route into Korea.

Thomas Choe then went to Sopalgaja in Manchuria and continued his studies under the tutorship of Bishop John Ferreol, the Coadjutor Bishop of the Joseon Vicariate Apostolic. In 1843, through Father Libois, he joined the Paris-based French Order of the Immaculate Heart of Mary (SS. Coeur de Marie). In the midst of all of this, he heard news of the persecution and martyrdom which had occurred in his homeland. At that time, he sent a letter to his former teacher, Father Legregeois, who had returned to France, and expressed the feelings in his heart as follows :

"Since I am not able to distinguish myself like my father and brothers, my situation is very miserable. I could not get involved like them in the glorious war as a soldier of Christ. I am truly ashamed. They were my worthy compatriots, my brave fellow countrymen! Yet, I am still left languishing with feelings of much weakness and immaturity.

Most gracious God, our Father! Please hear the cries uttered by the blood of your servants! Have mercy on us. Show us your overflowing compassion and the almighty power of your embrace! Will I, O God, someday, be worthy to participate in the great challenge of the priests and the suffering of my brothers, in order to make up for what is lacking in the Passion of Christ and so complete the work of Salvation ?"

Thomas Choe, who had continued his studies, received the Order of Deacon, along with his companion Andrew Kim, from Bishop Ferreol on about December 10, 1844. After Deacon Andrew Kim received ordination to the Prieshood and left with Bishop Ferreol and Father Anthony Daveluy for Korea, Thomas Choe, while staying behind at Sopalgaja with Father Joseph Maistre, strove to discover another route to his homeland.

Ordination to the Priesthood and Return Home :

While he was searching for a way to return home, Deacon Thomas Choe met with secret envoys of the Korean Catholic Church and heard the news of the 1846 Persecution and the martyrdom of his companion, Father Andrew Kim. He wrote the following letter to his former teacher, Father Legregeois, and conveyed to him the heartbreaking news of his motherland :

"Finally, with the feeling of being released after a long captivity and with hope of getting a welcome from my companions, I went in an elated mood to Byeonmun (fortress gate on the Korea-China border). However, when I reached Byeonmun, my hopes were shattered to pieces. I was thrown into shock by the tragic news. I and my pitiful country felt such grief that nothing could provide consolation. The news of the death of Father Andrew, my dearest companion, will be a cause of deep sadness for you also, Father."

Deacon Thomas Choe, on being restrained by the secret envoys of the Korean Catholic Church, abandoned his intention of going home and, on reaching the Far Eastern Headquarters which had been moved to Hong-kong, he translated into Latin “The Achievements of the Korean Martyrs.” At the same time, he kept seeking for a way to return to his homeland and, in August 1847, he boarded a French warship and, although he arrived at the shores of Korea, he could not meet up with the secret envoys and so failed in the attempt to reach home.

He then moved to Shanghai and was finally ordained to the Priesthood on April 15, 1849 at Tsangkalou (or Kimkaham) Churh, The ordaining prelate was Bishop Maresca, a member of the Society of Jesus and Ordinary of the Jiang-nan Vicariate Apostolic.

After ordination, Father Thomas Choe left Shanghai in May of that year and went to the area of Liaodong where he began pastoral ministry under the direction of Bishop Saint Simeon Berneux. In November, he once again met Father Maistre and, as a result of making an attempt to go home, he met up with the secret envoys of the Korean Catholic Church on December 3 and managed to return to his country. Because of the danger of detection, Father Maistre was unable to enter Korea.

As soon as he arrived in his homeland, Father Thomas Choe, after meeting with Bishop Ferreol and Father Daveluy, began to visit the Catholics who were hiding in different locations. From the beginning of 1850, during a period of six months, he walked over 5,000 lys (about 2,235. 6 km) through five provinces and visited 3,815 Catholics. After that he settled at the Baithi Christian Village, Jincheon, the centre of his pastoral ministry.

He continued this type of apostolate for about 11 years and 6 months. Not only that, he availed of resting periods to translate the Chinese catechism and prayer book into the Korean language, assisted the entry into Korea of missionaries, sent seminarians to the seminary in Penang, Malaysia and collected data on the martyrs.

It was not easy, of course, to travel around the Catholics who were scattered throughout the whole country. He was sometimes mistaken for a foreigner and chased from the villages and constantly faced the danger of death in raids by the police. Once, during his journeys in 1859, he was detected and severely beaten by the police and non-believers, chased from an inn where he had been staying and, half-naked, he wandered through deep snow for the whole night. However, nothing could strip him of his Faith and his love for his country and the Catholics.

At the time of the Kyeongsin Persecution of 1860, Father Choe Thomas and several Catholics were confined to a corner of Kyeongsang-do and had to survive without contact with the Ordinary of the Vicariate Apostolic, Bishop Berneux, and other missionaries. He wrote again to his teacher, Father Legregeois, explaining his dire situation and requesting help for the Korean Church :

"Save us from distress! An awful misfortune has brutally descended upon us. The enemies are encroaching upon us. They are rushing to destroy the inheritance which has been redeemed by your Precious Blood. If you do not help us from on high, we cannot stand up to them.

Most reverend and loving Father (Legregeois), through your fervent prayers, I beg you to please obtain help for us from Almighty God and our Holy Mother.

This is, most likely, my farewell letter. No matter where I go, I have no hope of evading the encircling net which is pursuing me. I earnestly commend our poor and wretched mission field to the unceasing concern and inexhaustible love of many priests."

Fortunately, Father Thomas Choe was able to escape from the place in which he had been confined and he completed his pastoral visitation. After that, he set off to give a report on his apostolic work to Bishop Berneux. However, he contracted typhoid fever on top of exhaustion and died at Munkyeong-eup or the Baithi Christian Village, Jincheon

On hearing the news, Bishop Berneux sent a letter to the Rector of the Paris Foreign Missions Society's seminary, Father Albrand, in which he eulogized Father Thomas Choe's Faith, zeal and the priestly discernment which he had shown at all times, and expressed his deep feelings of loss :

"Father Thomas Choe, because of his Faith, zeal for souls which burned like a fire and his admirable sense of discernment in his ceaseless and invaluable ministry, was a person who was very precious to us. After administering the Sacraments of the bountiful fruits of Salvation, our one and only Korean priest, Father Thomas Choe, departed this life last June on his way to Seoul to give a report to me on the progress of his work.

Father Pourthie, who first heard of the danger with which this kind priest was faced, arrived early enough to give him the Last Sacraments. However, Father Choe was unable to speak. The only two words which escaped from his dying lips were the Holy Names of Jesus and Mary. Father Choe, through very assiduously carrying out the duties of a holy priest for almost 12 years, converted many people and did not cease from striving successfully to save souls.

His death leaves me at a loss. It would be very difficult for western priests to enter, without the risk of great danger, the area, which covers many villages, where he carried out his apostolate. However, the Lord who took him from our midst will provide us with what we need."

When Father Thomas Choe was on the brink of death at a place 170-180 lys (76.01-80.48 kilometers) from Baeron, Father John Pourthie, who was at the seminary in Baeron, heard the news. He immediately rushed to Father Choe's side. However, the only words he could hear were the Holy Names of Jesus and Mary spoken with great fervour. Five months after the death of Father Choe, Bishop Berneux celebrated a solemn funeral ceremony and the remains of Father Choe were laid to rest in a hill behind the Baeron seminary.